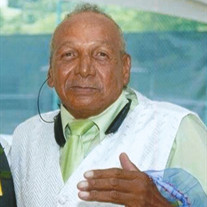 Frankie “Louis” Johnson, age 69, was born on April 7, 1949 in Bulls Gap, Tennessee to the late Emogene “Irene” Thompson and Frank Johnson. He went to be with the Lord on August 4, 2018 at the Johnson City Medical Center surrounded by his family.      Louis was a devoted member of New Zion Faith Center, where he served as a deacon. In his spare time he enjoyed participating in community events with his motorcycle club (Gos’s Angels), completing handy work, traveling, and helping others whenever given the chance.      In addition to his parents, he is preceded in death by his wife (Virginia Wells), a brother (Eddie Johnson), and son Robert Stevenson.      Survivors include a daughter, McKeysha Wells of Shelby, North Carolina; son Oliver Johnson of the home, and step children Loretta Degree and Della Gardner, both of North Carolina; a granddaughter Laesa Stewart and great grandson Kaiden Hamrick. Additional survivors include two sisters; Ernestine “Tina” Morrison and Roslyn Robinson, and four brothers; Jerry (Dede) Collins, David (Donna) Collins, John Collins Jr, and Shayne Collins and step father John Collins Sr, all of Johnson City, Tennessee. He also leaves to mourn his cousin and special friend Roy Lee, as well as a host of nieces, nephews, cousins, and friends. The family would like to thank the doctors and nurses in the intensive care unit at JCMC for the care and support they provided during Louis’ hospitalization.      The funeral service for Mr. Johnson will be conducted at 1:00 P.M. Thursday at Mount Zion Faith Center with Pastor Ernest Widby, Sr., Rev. Ricky Nobleton, Rev. Christine Scurry, Rev. William Hampton, and Rev. Wjualana Hampton officiating.  The family will receive friends from 11:00 A.M. until 1:00 P.M. in the sanctuary of the church.  Graveside services will follow at Washington County Memory Gardens.    Pallbearers will be Lynn Fitzgerald, Roy Lee, Jeff Waterson, “Turk”, Fred Harrison, Donnie Evans, and David Collins.

The family of Frankie Louis Johnson created this Life Tributes page to make it easy to share your memories.

Send flowers to the Johnson family.