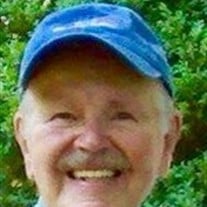 Frank L. Knisley, Jr., Johnson City, died Monday, October 3, 2016, at Franklin Woods Community Hospital, following 88 years of a full life. Frank was a native of Hickory, NC, and had been a resident of Johnson City for most of his life. He was a son of the late Frank L. and Fanny Doris Remine Knisley. Frank was a 1945 graduate of Science Hill High School, attended East Tennessee State College for a year and a half before graduating in 1949 with a degree in Architecture from Southern Technical Institute, Atlanta, which later became part of the Georgia Institute of Technology, better known as Georgia Tech. He was a veteran of the U.S. Army, having served in both World War II and the Korean War. Frank began his work with Alfred Abernathy Architecture, then with Beeson and Beeson Architectural Design before working independently in 1977, and was still designing plans until the time of his death. He is credited with the design of numerous local and regional homes, churches and public buildings. Early on, Frank, along with Tom Dosser, was instrumental in the creation and design of Buffalo Mountain Park, and was actually involved in the cutting and clearing of most of the trails. Later he was instrumental in the early conception of the Tweetsie Trail. Frank was most proud of his work in the design of the Johnson City/ Washington County Veterans Memorial, on the corner of Market Street and Veteran's Way. He was a member of First Presbyterian Church, Elizabethton, where he served as Elder and sang in the choir. Frank formerly served on the Johnson City Planning Commission, was a longtime board member of the Salvation Army, a longtime active member and past-president of the Johnson City Rotary Club, and when his children attended Southside Elementary School, was involved with its PTA, and served as its first male president. He had a love for the theater and arts, and for many years sang with The Civic Choral, was active with and continued support of the Jonesborough Repertory Theatre. Frank was an avid painter of both watercolors and oils. He loved hiking and bicycling, and for many years, his bicycle was his primary mode of transportation, especially to and from work. He rode in the inaugural "Roan Groan" bicycle race to the top of Roan Mountain, and many times in the years that followed, and at age fifty-five, rode his bike from Johnson City to Myrtle Beach in only three days. In addition to his parents, Frank was preceded in death by his brother, Maynard Remine Knisley, his sister, Betsy Moore Knisley, and his former wife and mother of his three children, Jeane Chalker Knisley. He is survived by his wife, Barbara J. Knisley; his three children and their families, daughter- Lee Knisley Sanders and husband Bob, Cincinnati, OH, their children, David Sanders and wife Pam, Adam Sanders and wife Essie Buxton, Catherine Sanders Greene and husband Mark, son- Joseph R. Knisley and wife Marileen, Johnson City, their son, Matt Knisley, daughter- Doris Knisley Moreland and husband Mark, Knoxville, their children, Brent Moreland and wife Amanda, Deanna Moreland Unger and husband Daniel; six great-grandchildren; Frank's wife's children and their families, Sam Blalock, Knoxville, Robert Blalock and wife Lorie, Columbia, SC, their children Blake and Natalie, Michael Blalock and wife Moneica, Johnson City, their children Gabriel and Johnny; nieces and nephews. The Celebration of the Life of Frank Knisley will be conducted Friday, October 7, 2016, at 7:00 P.M., from the East Chapel of Appalachian Funeral Home, with Rev. Mark Moreland, officiating. The family will receive friends Friday prior to the service from 5:00-7:00 P.M., and following the service as well if necessary, in the East Parlor of the funeral home. The graveside service and interment will preceed the visitation and funeral service, and will be held Friday, at 2:30 P.M., in Mountain Home National Cemetery, with military honors being accorded by the Boone Dam VFW Post #4933, members of the Tennessee Army National Guard and American Legion. Family members will serve as pallbearers. Those planning to attend are requested to meet at the funeral home by 2:00 P.M. Friday to proceed to the cemetery. The family requests those who prefer to make memorial donations in-lieu-of flowers in Frank's name, please do so to the Johnson City/Washington County Veterans Memorial Foundation, P.O. Box 3594, Johnson City, TN 37602. (checks may be made payable to: JCWCVM Foundation) Order Flowers Service DetailsFriday, October 7th, 2016 7:00pm, Appalachian Funeral Home- East Chapel Interment DetailsMountain Home National Cemetery

Frank L. Knisley, Jr., Johnson City, died Monday, October 3, 2016, at Franklin Woods Community Hospital, following 88 years of a full life. Frank was a native of Hickory, NC, and had been a resident of Johnson City for most of his life. He was... View Obituary & Service Information

The family of Frank Leroy Knisley Jr created this Life Tributes page to make it easy to share your memories.

Send flowers to the Knisley family.