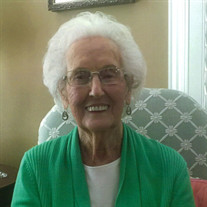 Frances Long Blake, 93, passed away November 26, 2019 at her daughter and son-in-law’s residence after a brave battle of cancer. Mrs. Blake previously resided in Milton, West Virginia where she lived for 71 years. Frances was born February 8, 1926 in Greenville, South Carolina. In addition to her parents John Grady and Bessie Long, she was preceded in death by her husband, Hubert Blake Jr., in 2001, her twin sister, Catherine Wiles of Savannah, GA; and her younger sister, Dorothy Senn Stewart of Silverstreet, SC. Frances met her husband during the end of World War II at Fort Bragg, North Carolina, while working as a typist, typing soldier discharges on the ‘new’ electric typewriters. They married June 4, 1946 in South Carolina and moved to Milton, West Virginia where they lived together 55 years. Those left to cherish her memory include two sons: John Blake and wife Sharon, Charlotte, NC; Jerry Blake and wife Elizabeth, Milton, WV; one daughter, Judy Warnick Whitehurst and husband Ashley, Blountville, TN; grandsons; J. C. Warnick and wife Robin, Atlanta, GA; Chad Warnick and wife Cassie, Smyrna, TN; three granddaughters: Marci Bennett and husband Mike, Durham, NC; Paige Summey and husband Brandon, Matthews, NC; Susan Seward and husband Tony, Indian Trail, NC; Six great-grandchildren: Christopher and Rachel Bennett, Ryan and Skylar Summey, Blakely Warnick, and Jensen Warnick. Also survived is a special sister-in-law Mildred Blake; special nieces, nephews, cousins, and beloved friends. Frances was a member of the Milton United Methodist church for 65 years. She was a devoted homemaker and worked outside the home for Wetterau, Inc. for ten years from 1980 until her retirement in 1990. Everyone loved Mrs. Blake’s chocolate pies and would do just about anything to get one!! Her pies will be missed, but mostly her sweet southern voice and the beautiful mother, grandmother, and person she was. A special thank you to Mrs. Blake’s live-in caregiver, Jeanie Turner for the many hours of love and care, day and night for the past six months, to Stacie Morrell from Hospice for the extra care and guidance, to two devoted friends before Ms. Blake moved to Tennessee in 2017, Steve Martin who kept her home in working order, brought her special treats, meals, watched over her property when she was out of town, and was always there in any emergency situation, and Lynn McGinnis for all the fun years and episodes of “Dancing With the Stars”, a never ending stock of library books; and rides to church services. A private graveside service will be held Saturday, January 4, 2020, at White Chapel Gardens in Barboursville, WV. Friends and family may gather at Milton United Methodist Church, Milton, WV at 12:00 p.m. followed by a memorial service at 2:00 p.m. In lieu of flowers, contributions may be sent to Milton United Methodist Church, 1007 Church Street, Milton, WV 25541, or ‘The Bridge Home No-Kill Animal Rescue’, P. O. Box 654, Blountville, TN 37617.

Frances Long Blake, 93, passed away November 26, 2019 at her daughter and son-in-law&#8217;s residence after a brave battle of cancer. Mrs. Blake previously resided in Milton, West Virginia where she lived for 71 years. Frances was born February... View Obituary & Service Information

The family of Frances Long Blake created this Life Tributes page to make it easy to share your memories.

Send flowers to the Blake family.