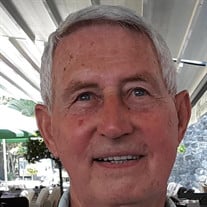 Felix C. Lowe of Bluffton, SC, passed away on August 31, 2020. His wife and family were by his side. Felix was born at home on November 12, 1933, in Mountain City, TN. He was preceded in death by his parents Ned Lowe and Sarah Lowe, sisters Agnes Banks, Sandra Bolton, Elizabeth Munsey and brother Ronald Lowe. Felix is survived by Susan, his wife of 58 years, his two exceptional sons, Joshua of Manassas, VA and Christopher of Bluffton, his grandchildren Carleigh Jean Lowe and Shane Christopher Lowe, and numerous nieces, nephews and cousins. Spending his early childhood in Detroit, MI, he graduated from Happy Valley High School in Tennessee where he finished his high school years. After high school, he enlisted in the Navy in 1952. His Navy service included three years in the Far East aboard the heavy cruiser U.S.S. Bremerton 77. He was then transferred to Adak, Alaska for assignment. During his service, he was awarded the National Defense Medal, a Korean Unit Citation, the Korean War Service Medal, with two battle stars, the United Nations Service medal and the Good Conduct Medal. Following his honorable discharge from the Navy in 1956, he enrolled in East Tennessee State University, graduating in 1959 with a double major in Industrial Arts and English. While in college, he was elected to Who’s Who in American Colleges and Universities, was president of Mu Delta Kappa, Phi Sigma Kappa, and the Young Democrats. He was a feature writer for the college newspaper and was active in campus politics. Following college, Felix taught English in Arlington County, VA, and adult education classes for The University of Virginia and George Washington University. In 1962, he took a job as a college traveler and then as an editor for the Macmillan Company in New York City. In 1968, he took a job with a small computer assisted learning company in Newburyport, Massachusetts. He moved to Washington, DC as sales and marketing manager for the book division of the Brookings Institution. He finished his career in publishing as director of the Smithsonian’s book, music and video programs. Following retirement in 1994, he co-founded Rivilo Books, a publishing company that specialized in children’s books about American Indians. In 1995, he and Susan moved to Bluffton where he continued to write and edit books about Indians and aviation. He was the author of “John Ross” the first president of the Cherokee Indian nation, editor of numerous books about Indians and contributor to high school history books. Felix was active in tennis and several volunteer groups, including Friends With Wheels and Rotary Readers. He also enjoyed travel and he and Susan were often on adventures around the world to exotic places. One of his fondest memories was celebrating his 60th birthday while sailing down the Nile on a riverboat. Felix was a member of a number of professional associations, including the Jaycees, the Association of American University Presses, and the Washington Book Publishers, which he helped start. He served on the board of Friends of Hilton Head Library and was a member and the secretary of the Bluffton Men’s Fellowship Club. He was a member of the Lowcountry Presbyterian Church. A graveside service in honor of his life will be held in Johnson City, TN at 11:00 AM on Saturday. In lieu of flowers, please consider making donations to Family Promise, 181 Bluffton Rd. Unit 101-D, Bluffton, SC 29910, or Lowcountry Presbyterian Church, 10 Simmonsville Rd., Bluffton, SC 29910. Funeral arrangements by Appalachian Funeral Home & Cremation Services.

Felix C. Lowe of Bluffton, SC, passed away on August 31, 2020. His wife and family were by his side. Felix was born at home on November 12, 1933, in Mountain City, TN. He was preceded in death by his parents Ned Lowe and Sarah Lowe, sisters... View Obituary & Service Information

The family of Felix C Lowe created this Life Tributes page to make it easy to share your memories.

Send flowers to the Lowe family.