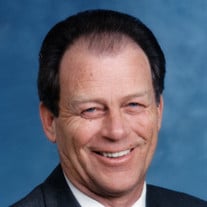 Farrell Bennett, 76, Johnson City, went to be with the Lord on Saturday, June 16, 2018, at his residence, following a brief illness.  Farrell was a native and lifelong resident of Johnson City.  He was a son of the late Harrison and Georgia Pearl Arnett Bennett.  Farrell was a 1959 graduate of Lamar High School, and later received a Bachelor’s Degree in Accounting in 1975, and a Master’s Degree in Accounting in 1979, both from Steed College.  He was a U.S. Air Force veteran, serving four years in Anchorage, Alaska, then two years in the Air Force Reserves.  Farrell was employed with Holston Army Ammunition Plant, retiring after thirty-two years of service, then returned for five years after Holston Army Ammunition Plant became BAE Systems, “re-retiring” in 2007.  He was a longtime member of Piney Grove Free Will Baptist Church, where he served as Sunday School Superintendant and teacher, and was the assistant van driver.  Farrell loved to spend time with his family, especially his grandchildren. He enjoyed playing golf, putt-putt, spending time in the mountains, and served as an usher for the University of Tennessee at home football games for the past nineteen years.  In addition to his parents, Farrell was preceded in death by five brothers, Elmer, Roy, Henry, Richard and Clyde Bennett, two sisters, Sara Humphreys and Ann Barnett.  He is survived by his wife of more than fifty-one years, Brenda Barber Bennett; two sons, Hershel Farrell Bennett and wife Gabrielle, Alpharetta, GA, and Anthony Lynn Bennett and wife Liz, Kingsport; five grandchildren, Bronwyn, Kensley and Braeden Bennett, Alpharetta, Evie Kate and Brendan Bennett, Kingsport; four brothers, John and Mickey Bennett, Oregon, Ray Bennett, R.C. Bennett and wife Brenda, all of Johnson City; three sisters, Dorothy Ledbury, Oregon, Frances Campbell, Watauga, and Nita Rice, St. Simons Island, GA; many, many, many nieces, nephews and cousins.  The family would like to thank Brooks Monroe and Avalon Hospice, for their excellent care of Mr. Bennett.  The funeral service will be conducted Wednesday, June 20, 2018, at 7:00 P.M., at Piney Grove Free Will Baptist Church with Rev. Paul Crowe, Rev. Byrl Fann and Rev. Howard Ray, officiating. Farrell’s son, Hershel Farrell Bennett, will Eulogize his father. Special music will be provided by the church trio and The Quillen Family.  The family will receive friends prior to the service from 5:00-7:00 P.M., in the Sanctuary of the church.  The graveside committal service will be held Thursday at 10:00 A.M., in Mountain Home National Cemetery. Military honors will be accorded by the Bristol V.F.W. Post #6975 and members of the Disabled American Veterans Chapter 39, Bristol. Nephews and cousins will serve as active pallbearers. Honorary pallbearers will be Ed Hoare, Hershel Buchanan, the Men of Piney Grove F.W.B. Church, his golf, putt-putt and U.T. football buddies. Those planning to attend are to meet at the cemetery by 9:50 A.M. Thursday.  The family requests that in-lieu-of flowers, donations in Farrell’s name be made to the Disabled American Veterans Chapter 39, P.O. Box 4041, Bristol, TN 37625.  Memories and condolences may be shared at www.appfh.net.

Farrell Bennett, 76, Johnson City, went to be with the Lord on Saturday, June 16, 2018, at his residence, following a brief illness.  Farrell was a native and lifelong resident of Johnson City.  He was a son of the late Harrison and Georgia... View Obituary & Service Information

The family of Farrell Bennett created this Life Tributes page to make it easy to share your memories.

Farrell Bennett, 76, Johnson City, went to be with the Lord on...

Send flowers to the Bennett family.