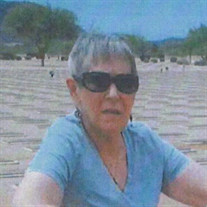 Evadna Crawford Teague Fruewirth, 80, Gray, died Sunday, April 26, 2020, at the Johnson City Medical Center, following a lengthy illness. Evadna was born at the family home in Washington County to the late Robert and Lola Whitaker Crawford. She was a 1957 graduate of Sulpher Springs High School. Evadna was a resident of California and Arizona before returning to Washington County in 2013. She was a former Customer Service Representative with Wal-Mart, Glendale, AZ. Evadna was a member of Central Church of Christ, Johnson City. In addition to her parents, she was preceded in death by her husband, Carl Michael Fruewirth, in 2013, and a brother, Junior Crawford. Evadna is survived by her son, Eddie Teague and wife Amy, Johnson City; two daughters, Stacey Fruewirth-Helmintaler, and Kristen Fruewirth Carter, both of Glendale; two brothers, Harold Crawford, California, Wade Crawford, Reno, NV; several grandchildren and great-grandchildren in Tennessee and Arizona; many nieces and nephews. It was Evadna’s wishes to be cremated then reunited with her husband in National Memorial Cemetery of Arizona, Phoenix. She was a five-time cancer survivor, therefore in lieu-of-flowers, memorial contributions may be made to the American Cancer Society, 871 Weisgarber Rd, Knoxville, TN 37909, or to the American Heart Association, 3101 Browns Mill Rd, STE 6, PMB 321, Johnson City, TN 37604. Memories and condolences may be shared at www.appfh.net. Appalachian Funeral Home & Cremation Services, Johnson City, is serving the Fruewirth family. (928-6111)

The family of Evadna Dean Fruewirth created this Life Tributes page to make it easy to share your memories.

Send flowers to the Fruewirth family.