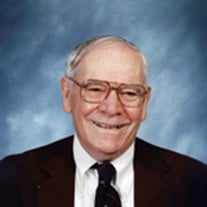 Ernest Harold Burleson, age 98, of Johnson City, went home to be with the Lord on Wednesday, December 9, 2015 at the Community Living Center of the Veterans Administration. A native of Caretta, West Virginia, he was a son of the late Millard and Alma Smith Burleson. Mr. Burleson was a graduate of Science Hill High School, Milligan College, and East Tennessee State University. He was a World War II veteran serving in the US Navy. He was a member of the American Legion Post#24, the Veterans of Foreign Wars, and the Destroyer Escort Sailors Association. Mr. Burleson retired from North American Rayon Corporation after 36 years as a Chemical Lab Technician. He had been an active member of Munsey Memorial United Methodist Church since 1932, where he was a member of the Munsey Brown Fellowship Class. An entertaining storyteller, he could recall minute details of early life in Johnson City often times throwing in a good dose of humor. Not only can he recall history, he lived it. In addition to his parents, he was preceded in death by a sister, Pauline Chattaway; a brother, Harry C. Burleson. Survivors include a brother, Louis Burleson, Johnson City; two nieces, Bonnie Propes and husband Bob, Johnson City, Laura Phan and husband Duc, Ocala, FL; nephew, Eddie Burleson and wife Ressie, Piney Flats; great niece, Windy Porter and husband Dillon, Waynesboro, VA; great great nieces, Victoria Porter and Lauren Porter. Several nieces and nephews also survive. The funeral service for Mr. Burleson will be conducted at 11:00 A.M. Saturday, December 12, 2015 in the sanctuary of Munsey Memorial United Methodist Church. The family will receive friends Saturday from 10:00 until 11:00 at the church. The graveside service and interment will be conducted following the funeral service at Monte Vista Memorial Park. In lieu of flowers, memorial contributions may be made to the Holston Home for Children, P.O Box 188, Greeneville, TN 37743, or Munsey Memorial United Methodist Church, 201 E. Market Street, Johnson City, TN 37601. The family would like to extend a special thank you to the staff of the V.A. Community Living Center who went over and beyond for Harold. Order Flowers Service DetailsSaturday, December 12th, 2015 11:00am, Munsey Memorial United Methodist Church Interment DetailsMonte Vista Memorial Park

Ernest Harold Burleson, age 98, of Johnson City, went home to be with the Lord on Wednesday, December 9, 2015 at the Community Living Center of the Veterans Administration. A native of Caretta, West Virginia, he was a son of the late Millard... View Obituary & Service Information

The family of Ernest Harold Burleson created this Life Tributes page to make it easy to share your memories.

Send flowers to the Burleson family.