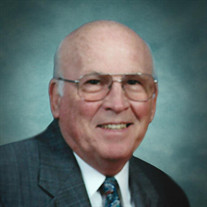 Edwin Erwin McClure, whose Christian values and love of people drove him to a life of service to others, died Feb. 14 at NHC Johnson City with his daughter at his side. He was 94. Ed was a beloved husband, father, grandfather, and great-grandfather whose immeasurable love and devotion to family, along with his personal philosophy to help others, guided his life. Ed, fondly referred to as “2E”, was born June 29, 1927, to Glenn and Mary Garrett McClure in Waynesville, N.C. He graduated from Waynesville High School and as a youth helped in his father’s construction business. At 17, Ed joined the U. S. Navy during World War II and served on the aircraft carrier USS Tarawa. After his Honorable Discharge from the Navy, Ed obtained a degree from Blanton’s Business College in Asheville, N.C., and went to work for Sears, Roebuck and Co. in Asheville. In 1947 Ed won the heart of Virginia Dare Ledbetter, who he had met at a square dance, and married the woman who was his lifelong partner in business and life. In 1968, Ed moved his wife and their son and daughter to Johnson City where he opened McClure Hardware. Ed provided jobs to high school and college students who helped the business flourish until he retired in 1984. Ed had been deeply involved in the community and his church, Southwestern Baptist Church, while working, but his volunteer work grew enormously with retirement. Ed donated years of service to the Sequoyah Council of the Boy Scouts of America and would spends days at a time developing the grounds and building structures at Camp Davy Crockett in Hamblen County. For his countless hours of support and volunteer work the Sequoyah Council, with the approval of the Boy Scouts National Court of Honor, bestowed upon Ed “The Silver Beaver Award” for distinguished service to youth. The American Red Cross honored Ed and his wife with the Clara Barton Honor Award for Meritorious Volunteer Leadership for the State of Tennessee. Ed had served as chairman of the local American Red Cross chapter, donated more than 16 gallons of blood to the agency, and traveled across the nation and internationally providing disaster aid. Ed was an active member of the Civitan Club and volunteered for the Special Olympics, the Kidney Foundation, the Senior Citizens Center, and the Johnson City Medical Center. Ed served multiple terms on the Johnson City Civil Service Board and even attended the Johnson City Police Department’s Civilian Academy so he could better serve on the board. Construction skills Ed learned as a youth helping his father served him well when he worked with the Holston Habitat for Humanity building several homes. Ed also served on the boards of several businesses. In 1990, Ed was honored by the State of Tennessee as the Volunteer of the Year for his work with Habitat for Humanity and the American Red Cross. Ed was preceded in death by his parents, brothers Spellman McClure and William Robert McClure, and sisters Mildred Buchanan and Mary Katherine Stephens. Ed is survived by his wife of 74 years, Virginia “Gennie” McClure; son Anthony “Tony” McClure (Beth) of Easley, S.C.; daughter Sharon McClure Jacobs (Don) of Knoxville, TN; grandchildren Brandon McClure (Katie), Marietta, GA, Brooke McClure Scott (Greg), Tega Cay, S.C., and Holly Jacobs Hardin (Justin), Andersonville, TN; 12 great-grandchildren and numerous loved nieces and nephews. The family will receive friends from 5 p.m. to 6 p.m. Monday, Feb. 21, in the sanctuary of Southwestern Baptist Church, 1112 Cherokee Road. At 6 p.m. a service will follow with Pastor Greg Salyer officiating. Interment will be at 1 p.m., Tuesday, Feb. 22, at Mountain Home National Cemetery off Veterans Way. Those attending will meet at the cemetery. Pallbearers will be Ed’s grandsons and great grandsons; Brandon McClure, Grant McClure, Justin Hardin, Greg Scott, Ethan Piercy, Max Piercy, and Van Piercy. Honorary pallbearers are members of Ann Lacey Sunday School class at Southwestern Baptist Church. The family wishes to thank the staff of NHC Johnson City for their compassionate care and will be forever grateful for the special attention afforded by caregiver Carol Moore. In lieu of flowers, donations can be made to Southwestern Baptist Church, 1112 Cherokee Road, Johnson City 37604.

Edwin Erwin McClure, whose Christian values and love of people drove him to a life of service to others, died Feb. 14 at NHC Johnson City with his daughter at his side. He was 94. Ed was a beloved husband, father, grandfather, and great-grandfather... View Obituary & Service Information

The family of Edwin E. McClure created this Life Tributes page to make it easy to share your memories.

Edwin Erwin McClure, whose Christian values and love of people...

Send flowers to the McClure family.