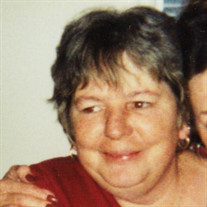 Edna Claire Neal, 64, Johnson City, died Tuesday, December 7, 2021, at the Johnson City Medical Center, following a lengthy, courageous battle with cancer. Edna was a native of Ceres, VA, and a daughter of the late Silvey Lacy Neel and Mary Madelyn Short Neel Kiser. She worked for her step-father as a residential painter. Edna was a Methodist. In addition to her parents, she was preceded in death by a niece, Melissa Bland. Edna is survived by her step-father, Wilson M. Kiser, Johnson City; her brother, Danny Joe Neel and wife Tracy, Houston, TX; her sister, Arlene Bland and husband Jack, Glade Spring, VA; an aunt, Shirley Clemons and husband Roger, Tazwell, VA; several nieces, nephews and cousins. It was Edna’s wishes to be cremated. There will be a private inurnment in Red Oak Cemetery, Ceres, VA, at a later date.

The family of Edna Claire Neal created this Life Tributes page to make it easy to share your memories.

Send flowers to the Neal family.