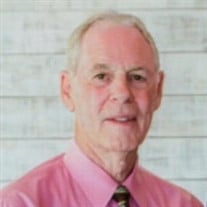 David Lynn Hodge, 78, Johnson City, died Tuesday, November 30, 2021, at his home on the family farm, following a lengthy, courageous battle with cancer. Lynn was a native and lifelong resident of Washington County. He was a son of the late Niles L. and Pauline Denny Hodge. Lynn was a 1961 graduate of Boones Creek High School, and later received his B.S. Degree in accounting from Columbia College. He served in the U.S. Army, where he graduated with a specialty in Military Intelligence from Fort Holabird, MD, and served in U.S. Military Intelligence Battalion Aerial Reconnaissance Support. Lynn was retired from Commercial Banking, where he worked for thirty-three years as a Closing Manager all along the east coast, from Maine to Miami. He was a member of Boones Creek Christian Church. In addition to his parents, Lynn was preceded in death by three brothers, Billy Jean Hodge, Manuel Hodge and infant Jeffery Allen Hodge, one sister, Sharon Feathers. He is survived by two sisters, Jane Gambrell, Johnson City, and Kathy Salyer (Chad), Church Hill; brother-in-law, Fred Feathers, Kingsport; sister-in-law, Trula Hodge, Gray; several nieces and nephews. The funeral service will be conducted Friday, December 3, 2021, at 7:00 P.M., from the Sanctuary of Boones Creek Christian Church, with Mr. David Clark, Minister, and Mr. Dick Morris, Minister, officiating. The family will receive friends prior to the service Friday from 5:00–7:00 P.M. at the church. The graveside committal service will be held Saturday, at 10:00 A.M., in the Mausoleum Chapel at Washington County Memory Gardens. Active pallbearers will be Isaac Barkley, Robbie Boy, Robbie Feathers, Jordan Little, Justin Little and Chad Salyer. Honorary pallbearers are Dr. Wael E. Shams, Dr. Greg Moidis and staff, Allen Moody, Phil Ulmer, and the staff of Caris Healthcare. Those planning to attend are to meet at the Mausoleum by 9:50 A.M. Saturday. Those who prefer to make memorial donations in-lieu-of flowers, please do so in Lynn’s name to the charity of your choice. Memories and condolences may be shared at www.appfh.net. Appalachian Funeral Home & Cremation Services, Johnson City, is honored to serve the Hodge family. (928-6111)

David Lynn Hodge, 78, Johnson City, died Tuesday, November 30, 2021, at his home on the family farm, following a lengthy, courageous battle with cancer. Lynn was a native and lifelong resident of Washington County. He was a son of the late... View Obituary & Service Information

The family of David Lynn Hodge created this Life Tributes page to make it easy to share your memories.

Send flowers to the Hodge family.