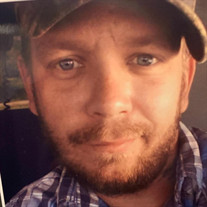 Danny Richard Dye, 31, Erwin, died unexpectedly Thursday, September 17, 2020, at his home. Danny was born in Johnson City, raised in Washington County, and a lifelong resident of this area. He was the son of Danny J. and Kris Dye, Greeneville. Danny was a 2007 graduate of Daniel Boone High School, where he was a member of the football and baseball teams, and was inducted into the Daniel Boone High School Sports Hall of Fame. Following graduation, he attended Emory & Henry College on a football scholarship. Danny was employed with Summers-Taylor, Inc., where he drove a truck with the Concrete Division. He loved sports, playing when he was younger and watching as he became older. Danny was preceded in death by his paternal grandparents, Jett Dye, Jr. and Chris Dye, his maternal grandparents, Richard Preisch and Rose Harrington Presley, and an uncle, David Allen Dye. In addition to his parents, Danny is survived by three children, Kaylyn Dye and Zane Dye, Erwin, Abby Dye, Greeneville; his fiancé, Jessica Phillips, Erwin; four sisters, Aerial Dye, Erwin, Tifani Dye, Jonesborough, Brittney Crum and Kai Dye, Both of Greeneville; several nieces, nephews, aunts, uncles, cousins, and his “side kick”, Bo. The Celebration of Danny’s Life will be held Friday, September 25, 2020, at 7:00 P.M., in the East Chapel of Appalachian Funeral Home, with his uncle, Roger Dye, officiating. During this time, Danny’s family and friends will be given the opportunity to share a memory or experience. The family will receive friends Friday prior to the service from 5:00-7:00 P.M. in the East Parlor of the funeral home. The graveside committal service will be Saturday at 1:00 P.M. in Fairview Cemetery, 1033 Leesburg Rd., Jonesborough, TN 37659. Active pallbearers will be Danny, Aerial, Tifini and Brittney Dye, Keith Keys and Stephen Harman. Honorary pallbearers will be Danny’s co-workers at Summers-Taylor. Those planning to attend are to meet at the cemetery by 12:50 P.M. Family and friends attending services are recommended to wear a protective face mask and practice social distancing. In-lieu-of flowers, the family requests donations be made to the funeral home to assist them with final expenses.

Danny Richard Dye, 31, Erwin, died unexpectedly Thursday, September 17, 2020, at his home. Danny was born in Johnson City, raised in Washington County, and a lifelong resident of this area. He was the son of Danny J. and Kris Dye, Greeneville.... View Obituary & Service Information

The family of Danny Richard Dye created this Life Tributes page to make it easy to share your memories.

Send flowers to the Dye family.