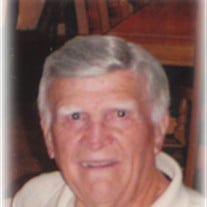 JOHNSON CITY- Dana Charles Hendrix of Johnson City, TN went to be with the Lord on February 15, 2018 at The Waters of Johnson City. Charles, known as 'Crosstie' to his friends was born April 20, 1924. A native of Erwin, TN, Charles was the son of the late D.H. and Sadie Hendrix. Charles entered the United States Marine Corps in 1942 and served in World War II as a rear gunner over the Pacific. After being discharged in 1946, Charles continued serving his country through the USMC Reserves until 1952. He was retired as a Railroad Yardmaster on the Clinchfield Railroad after 39 years of service. Through the years, Charles enjoyed hunting and fishing with his father, his daughter, and his friends from the Volunteer Sportsman Club of Georgia. Charles was a member of Central Baptist Church in Johnson City for 50 years. He was truly loved by everyone who knew him. In addition to his parents, Charles was preceded in death by his wife Helen, of 59 years, and his brother Jack Hendrix. Mr. Hendrix leaves a wonderful heritage in his only child, Janice, and son-in-law Greg Merriman; 3 granddaughters, Lindsay and husband Jeremy Kemp, Chelsea and husband Steve Mattis, and McKalie and husband Chris Wood; 5 great-grandchildren, Jacob, Tate and Stella Kemp, Eliza Jane and Palmer Mattis, and #6 great-grandson 'Charlie' Wood who is on the way - all of Knoxville, TN. A special thank you to the Dunbar Family for their love and kindness throughout the years. Also to The Waters Facility of Johnson City and Amedisys Hospice for their compassionate care to Charles during his stay. Family and friends will meet at 2:30 on Thursday, February 22, for a graveside service with Rev. Tim Tapp of Central Baptist Church officiating at the Mountain Home National Cemetery with full military honors provided by the American Legion Honor Guard. In lieu of flowers, memorial donations may be made to the American Legion Honor Guard of Kingsport, TN. P.O. Box 66 Kingsport, TN 37662 Order Flowers Interment DetailsMountain Home National Cemetery

JOHNSON CITY- Dana Charles Hendrix of Johnson City, TN went to be with the Lord on February 15, 2018 at The Waters of Johnson City. Charles, known as 'Crosstie' to his friends was born April 20, 1924. A native of Erwin, TN, Charles was the... View Obituary & Service Information

The family of Dana Charles Hendrix created this Life Tributes page to make it easy to share your memories.

Send flowers to the Hendrix family.