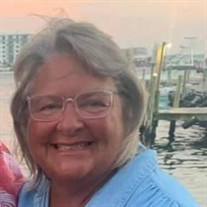 Cynthia Ison Torbett, 55, Johnson City, died Friday, November 27, 2020, at the Johnson City Medical Center, following a brief illness. Cindy was a native and lifelong Johnson City resident. She was the daughter of Ronald Bruce Ison, Sr., Johnson City, and Ginger Hamilton Ison, Johnson City. Cindy was a 1983 graduate of University High School, received a B.S. Degree in Business and Economics from Milligan College in 1987, a Master’s Degree in School Counseling K-12 from Lincoln Memorial University in 2012, and an Educational Specialist Degree in School Leadership from Union College in 2015. She was formerly employed with First Tennessee Bank for fifteen years, working at multiple branches in the local area. Cindy then worked briefly in the attendance office at Science Hill High School, and for the past nine years, worked as a Guidance Counselor at Colonial Heights Middle School. She was an active member of First Christian Church, Johnson City, where she was a member of the SALT Sunday School Class, an active member of the United Emmaus Community, and was serving on the Board of Directors of the Appalachian Fair. In addition to her parents, Cindy is survived by her husband of thirty-four years, Philip D. Torbett; two daughters, Alyson Torbett Patton, Vestavia, AL, and Laura Catherine Torbett, Johnson City; son-in-law, Joshua Patton; her brother, Ronald B. Ison, Jr., Johnson City; her brother-in-law and wife Richard Torbett and Lisa Kelechava, Knoxville; niece and nephews, Ronald B. “Trip” Ison, III, TX, Anna Torbett, Atlanta, GA, William Torbett, Knoxville. The family will have a private graveside service, and at a later date, have a public service that friends may join them to celebrate Cindy’s life.

The family of Cynthia "Cindy" Ison Torbett created this Life Tributes page to make it easy to share your memories.

Send flowers to the Torbett family.