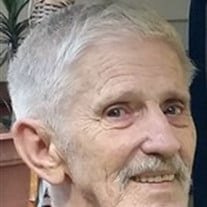 Clinton McKinley Jones, 83, Johnson City, passed away peacefully on Friday, February 12, 2016, at the James H. Quillen Veterans Affairs Medical Center Hospital. Clinton was a native of Unicoi County and has been a resident of Johnson City for most of his life. He was a son of the late Elzie Carter and Arralee Rowe Jones. Clinton was a U.S. Army veteran. He retired from Vaughn- Empire Furniture Company after forty-three years of employment. Clinton was a member of Skyline Heights Baptist Church. He loved spending time with his family, and enjoyed working in his yard, flower and vegetable gardens. Clinton was a dedicated, loving father, granddaddy and "pop pop". He was dearly loved by his family and friends. In addition to his parents, Clinton was preceded in death by his wife Alice in 2012, his brother Carroll, and a sister Norma Harmon. He is survived by his three children, Melissa Jones Carter, Jonesborough, Kathy Jones McPeck and Byron Jones, both of Johnson City; two grandchildren, Christopher Carter and girlfriend, Whitney, Kingsport, Hassie McPeck, Johnson City; one great-grandchild, Aubree Carter; three sisters, Sue Santoro, Ohio, Alice Blevins, North Carolina, and Louise Clark, Michigan; several nieces and nephews; special friends, Scott and Susan Emert. The family would like to extend a special "thank you" to the physicians and staff of C-1 at the V.A. hospital, and especially special care giver, Shelbie Jones. The funeral service will be conducted Tuesday, February 16, 2016, at 7:00 P.M. from the East Chapel of Appalachian Funeral Home, with Rev. Ron Owens, officiating. The family will receive friends Tuesday prior to the service from 5:00-7:00 P.M. in the East Parlor of the funeral home, and other times at the residence. The graveside committal service will be held Wednesday at 2:00 P.M. in Roselawn Memory Gardens. Pallbearers will be selected from family and friends. Those planning to attend are to meet at the funeral home by 1:30 P.M. to proceed to the cemetery. Order Flowers Service DetailsTuesday, February 16th, 2016 7:00pm, Appalachian Funeral Home- East Chapel Interment DetailsRoselawn Memory Gardens

Clinton McKinley Jones, 83, Johnson City, passed away peacefully on Friday, February 12, 2016, at the James H. Quillen Veterans Affairs Medical Center Hospital. Clinton was a native of Unicoi County and has been a resident of Johnson City for... View Obituary & Service Information

The family of Clinton McKinley Jones created this Life Tributes page to make it easy to share your memories.

Send flowers to the Jones family.