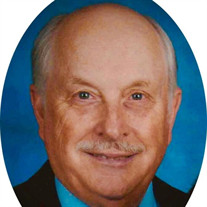 “Precious in the sight of the Lord is the death of His saints.” Psalm 116:15 Johnson City, TN—Charles Dana Ferguson, a Christian, loving husband, father, and grandfather, went Home to be with his Lord, Thursday, February 25, 2021, following a lengthy illness. Dana was born June 14, 1944, in Jonesborough, TN, to Herbert H. and Nellie Crawford Ferguson. In addition to his parents, he was preceded in death by 7 siblings—brothers Paul, Henry, and Allen Ferguson, and sisters Geraldine Ilseman, Sidney Buckner, Mable Miller, and Lorraine Swartz. He is survived by his loving wife, Carolyn Hall Ferguson; daughters Lindsey (Mike) Smith, and Lacey Ferguson; grandsons Austin Carter, Tyler Smith, and Nathan Hicks; one great-grandson, Ashton; brothers Dale (Veronika) Ferguson, Montgomery, IL, and David (Julie) Ferguson, Green Sulphur Springs, WV; sisters Martha (Jim) Lesiotis, Montgomery, IL, and Suzanne (Jack) Kiper, Naples, FL; several nieces and nephews. A graduate of Jonesboro High School, Dana attended ETSU, and retired from Eastman Chemical Co., where he worked as a Lab Analyst. He was a member of Piney Flats First Baptist Church, and previously at Heritage Baptist Church, where he served as a Sunday School Teacher, Deacon, and Usher. Dana was a man of great character, integrity, patience, and a quiet confidence that endeared him to all who knew him. He was known for his love, both of his family, whom he loved dearly, and of his friends, especially his best friend, Coach Bob May. He remained close with his High School friends, loved his church friends, and his “Breakfast at McDonalds” friends. Dana loved to laugh, always ready with a funny story, many told on himself and his lack of direction. He was a trivia whiz, astounding many with his ability to quote many years of facts and stats from football teams and their players. He followed both college and pro teams and was an avid UT fan. The family wishes to express a special Thank You to Dr. Turney Williams for his wonderful care for Dana, and for his friendship. Funeral services will be conducted Wednesday, March 3, 2021, at 2 PM, at Piney Flats First Baptist Church, 100 Cherry Rd., Piney Flats, TN. Service will be conducted by Dr. Allen Davis. Special music will be provided by Dwight Whitworth and Jacob Phillips. The family will receive friends prior to the service, from 1-2 PM at the church. Graveside committal services will immediately follow, at East Tennessee Cemetery. Active Pallbearers will be: Marlin Danielsen, Rev. Roy Yelton, Mike Britton, Larry Crigger, Kelly Botts, Dennis Ellis, Lee Bowser, Shane Morton, Gene Tuemler, and Ken Rawles. Honorary Pallbearers are Rev. Charles “Toonie” Cash, Richard Onks, Roger Langrel, Harry Harmon, Merv Pratt, Glenn Parris, Coach Bob May, Dr. Turney Williams, and Congressman Phil Roe, MD. Those who prefer to make donations in lieu of flowers may be made to Piney Flats First Baptist Church.

&#8220;Precious in the sight of the Lord is the death of His saints.&#8221; Psalm 116:15 Johnson City, TN&#8212;Charles Dana Ferguson, a Christian, loving husband, father, and grandfather, went Home to be with his Lord, Thursday, February 25,... View Obituary & Service Information

The family of Charles Dana Ferguson created this Life Tributes page to make it easy to share your memories.

“Precious in the sight of the Lord is the death of His saints.”...

Send flowers to the Ferguson family.