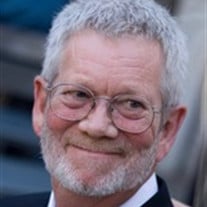 Carl Haber "Buzzy" "The Buzzard" Woods, II - passed away peacefully on Wednesday, June 21st, at his home in Surfside Beach, South Carolina. Son of the late Fraser Lyle Woods & Carl Haber Woods of Johnson City, TN. Brothers Joseph Fraser and William Harrison Woods, and sister, Jean Arthur Woods Cutshaw of Morristown, TN preceded him in death. Survived by his wife of 48 years today (June 28th, 1969), Chris McInturff Woods of Chris' Twirlettes from Unicoi, TN; Daughters: Haley Elizabeth Woods - the World Traveler; and Heather Paige Woods-Spiegel, husband Matt and granddaughters Ellie & Clara of Atlanta, GA; Sisters: Sarah Anne Woods of Johnson City, TN; Carla Elizabeth and husband John Zerkle of Fishers, Indiana; brother-in-law Tom McInturff and wife Jean of Jonesborough, TN; many nephews, nieces, and cousins. He was loved by all his family. Buzz attended East Tennessee State College (ETSC), and graduated from Steed College in Computer Science. He was in the Army National Guard, a member of SAE Fraternity, and the Rotary Club of Johnson City. Buzz was a Partner at Bridge Computer Systems, serving government offices in TN. He continued working for Bridge once it was sold, and later Saratoga Industries until his retirement a few years ago. At that time, Buzz and Chris bought a camper and traveled as much as possible across the U.S. His #1 love was his family - his girls and his sweet granddaughters, who called him "The Buzzard!" 2nd, he loved photography and especially taking pictures of Birds in Flight. Buzz also liked golf, biking, and walking on the beach to look for sharks teeth. The receiving of friends will begin at 2pm on Saturday, July 1st at Appalachian Funeral Home, followed by a Celebration of his Life starting at 4pm. Anyone who would like to say a few words or share a story about Buzz are asked to do so and it would be greatly appreciated. Those attending are asked to dress casual: shorts, jeans, T-shirts, ride your Harley as this was Buzz's style. Buzz will be cremated and ashes dispersed at a later time. In Lieu of flowers, donations towards a memorial bench at Brookgreen Gardens c/o Buzz Woods Attn. Wendy Belser, Director of Philanthropy PO Box 3368 Pawlely's Island, SC 29585 Phone in donations: 843.235.6047 Or to The Ronald McDonald House of Johnson City TN 418 N State of Franklin Road Johnson City, TN 37604 Order Flowers Service DetailsSaturday, July 1st, 2017 4:00pm, Appalachian Funeral Home- East Chapel

The family of Carl "Buzzy" Haber Woods II created this Life Tributes page to make it easy to share your memories.