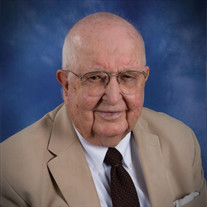 Bryson Frye Harding, 93, passed away Sunday, January 12, at Holston Valley Hospital after a brief illness. He was born June 7, 1926 in Jackson County, Oak Grove, Missouri. His parents were Walter B. Harding and Elizabeth Frye Harding. He had one brother, William B. Harding. All three preceded him in death. Mr. Harding attended Oak Grove High School and later the University of Missouri. He was employed by the Hartford Accident and Indemnity Co. in their Claims Department. He served them in Kansas City, Missouri, Albuquerque, New Mexico, and Dallas, Texas. He retired in 1980. Mr. Harding was christened and joined the Methodist Church where he served in many elected positions. Mr. Harding and Lillian Hunt Harding were married for 51 years before her death. Lillian had one son, Wiley Kim Rogers, whose father was killed in WWII. Dr. Kim Rogers taught at East Tennessee State University until his retirement. He was married to Leona Ricord and they had four children. After his retirement, Lillian and Bryson moved to Placitas New Mexico, close to Albuquerque and had a new home built. During their stay in New Mexico, Bryson started a picture framing business and had great success. Due to Lillian's heart problem and the altitude in New Mexico, it was necessary to move to Tennessee near her family. Mr. Harding's four step-grandchildren blessed him with seven great-grandchildren and 10 great-great-grandchildren. They, as well as many friends, survive him. Preceding Mr. Harding in death, other than his parents and brother, were his beloved wife Lillian, his step-son Dr. Kim Rogers and his wife Leona. The graveside service will be held in Monte Vista Memorial Park Wednesday, January 15, 2019, at 10:30AM. A memorial service will be held at Asbury at Baysmont in Kingsport at 2PM on Wednesday. In Lieu of flowers, memorials may be made to the First Broad Street United Methodist Church, 100 East Church St., Kingsport TN 37660.

Bryson Frye Harding, 93, passed away Sunday, January 12, at Holston Valley Hospital after a brief illness. He was born June 7, 1926 in Jackson County, Oak Grove, Missouri. His parents were Walter B. Harding and Elizabeth Frye Harding. He had... View Obituary & Service Information

The family of Bryson Frye Harding created this Life Tributes page to make it easy to share your memories.

Send flowers to the Harding family.