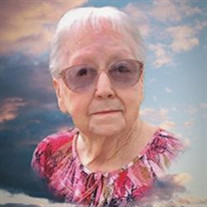 Bettie Joe Jackson, 86, Johnson City, died Thursday, July 23, 2020, at her residence, following a lengthy illness. Bettie was a native and lifelong Johnson City resident. She was a daughter of the late C.W. and Elizabeth Shelton Johnson. Bettie was a homemaker, and volunteered at the former Asbury Elementary School, where she was an active member of the PTA. Bettie was a longtime member of Skyline Heights Baptist Church. In addition to her parents, she was preceded in death by her husband, Bob Jackson, a son, Willie Jackson, two brothers, Cecil and Wayne Johnson, and a sister, Ola Fontana. Bettie is survived by one son, Andy Jackson and wife Linda, Cooleemee, NC; four daughters, Elizabeth Ferguson, Jonesborough, Darlene White and husband Kirk, Knoxville, Mary Lou Radford and husband Larry, Johnson City, Lynda Lane, Jonesborough; one sister, Alma Foster, Unicoi; seven grandchildren; fifteen great-grandchildren; four great-great-grandsons; several nieces and nephews. The family would like to thank her caregivers, Wanda; Kim, Shirley and Paula of Amedisys Hospice, and would like to extend a very special “thank you” to Bettie’s daughter-in-law Linda Jackson, for the excellent care given to her thru her illness. The family will receive friends Tuesday, July 28, 2020, from 11:30 A.M. - 1:30 P.M. in the East Chapel of Appalachian Funeral Home. The graveside funeral service will follow at 2:00 P.M. in the Historic Site of Mountain Home National Cemetery. Pallbearers will be selected from family and friends. The V.A. enforces social distancing and requires all attendees wear a mask, those who do not wish to adhere to these guidelines will be asked to remain in their vehicles. Those who prefer to make memorial donations in Bettie’s name may do so to the Washington County/Johnson City Animal Shelter, 3411 N. Roan St., Johnson City, TN 37601.

The family of Bettie Joe Jackson created this Life Tributes page to make it easy to share your memories.

Send flowers to the Jackson family.