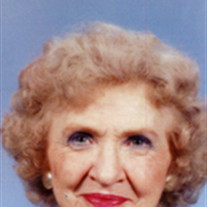 'Becky' Bess Street Angel departed this life after a spirited battle with failing health on April 2, 2017 at Tennova Hospice in Knoxville, Tennessee. She was born on December 9th, 1922 in Mitchell County, North Carolina to Charles Clay and Hassie Garland Street. After the untimely death of her mother soon after her birth, Bess was reared by her father and aunt, Celia L. Garland, along with her loving Garland grandparents, Gutteridge David and Isabelle and uncles Vallee and Frank Garland on the family farm in the Marbleton Community of Unicoi County. Following her graduation from business college in Johnson City, Tennessee, she moved to Washington, DC during World War II where she worked in military offices and Fort Belvoir, Virginia. She returned home after the war to help care for her grandparents and continued her career with defense and government agencies including Holston Defense in Kingsport and later as the executive assistant to several directors at Mountain Home Veterans Hospital. She worked with soldier's families in grief for a number of years then ended her career working in the director's office of Veteran's Hospital in its efforts to secure and open the East Tennessee State University School of Medicine. Along with her sister, Lucille, she was baptized in a frigid creek on the family farm in February of 1933 and grew up in small churches within walking or wagon distance of home. In the early years of her marriage, she attended Harrison Christian Church then in 1958 Becky became a founding member of Clark Street Baptist Church and later in life enjoyed several years of good fellowship at Tacoma Church of God. Since 2007, she maintained an apartment at Cornerstone Village where she enjoyed many friendships and was well-served by gracious and capable staff members. In recent months she was given additional support by special extended family members, Becky Hale and Helen Burrough. She will be remembered for a lifetime of tireless care of many family members of her own, of her Angel family, and of many friends who pre-deceased her. Throughout her life, she was known for her beautiful red hair, love of music and dancing, her special style of piano playing by ear, smooth alto voice, green thumb, excellent office management skills, pride in her stylish appearance, relentless determination, medical advocacy for the vulnerable, merciful generosity to the less fortunate, care of stray animals, clever resourcefulness and charm to the very end. She was predeceased by her sister, Lucille Street Williams, many Garland cousins she considered brothers and sisters, her former husband, James Thomas Angel and his twin sister, Ruth Angel McFaddin, and her mother-in-law, Mary S. Angel. She is survived by her daughter, Dr. Cathryn S. Angel of Knoxville, daughter Cynthia Ingram and husband, Tom, grandchildren Celia Therese Angel, Thomas Conner Ingram, Margaret Ingram Edwards and husband, Jacob, step-granddaughters, Jennifer Ingram and Jessica Ingram, devoted niece, Linda Williams Bamberg and husband, George, cousins Ralph and Joan Garland, Garland Anderson, many Garland nieces and nephews and special Angel family nieces, Beth McFaddin Beam, Meg McFaddin and Amy McFaddin Amann. Graveside services will be held at 3 p.m. Sunday, April 9, 2017 at Roselawn Cemetary followed by visiting with friends and family from 4:30 until 5:30 p.m. at Appalachian Funeral Home on Watauga Avenue in Johnson City, Tennessee. Honorary pallbearers will be Garland Anderson, Ralph Garland, Jeff Blackburn, Randy Ferrell, Kent Holley, Mike Hyder, Joe Whitehead, and Tony Bowman. In lieu of flowers, the family suggests memorials to East Tennessee Children's Hospital, Knoxville, Tennessee (ETCH.com) or the 'Just Lead' after-school ministry program at Laurel Church of Christ, 3457 Kingston Pike, Knoxville, Tennessee 37919. Memories and condolences may be shared with the family at www.appfh.net. Appalachian Funeral Home & Cremation Services, 800 E. Watauga Ave., Johnson City is serving the Street Angel family. (423)928-6111 Order Flowers Service DetailsSunday, April 9th, 2017 3:00pmInterment DetailsRoselawn Memory Gardens

'Becky' Bess Street Angel departed this life after a spirited battle with failing health on April 2, 2017 at Tennova Hospice in Knoxville, Tennessee. She was born on December 9th, 1922 in Mitchell County, North Carolina to Charles Clay and Hassie... View Obituary & Service Information

The family of "Becky" Bess Angel created this Life Tributes page to make it easy to share your memories.

Send flowers to the Angel family.