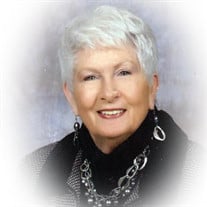 Barbara H. England Marks age 83 of Johnson City passed away peacefully on Thursday, January 9, 2020 surrounded by family and friends. Barbara was born in Knoxville, TN on February 19, 1936. Barbara was preceded in death by her parents Fred and Ruth (Spencer) Hill. In addition to her parents, she was preceded in death by her sister Peggy Cook, brother-in-law Jack Cook, and a nephew Jack David Cook Jr. Those left to cherish her memory are her daughter Deborah D England, sons Larry W. England and wife Debbie, Michael England and wife Christina, Fred England and wife Tammy, and twin sons Mark and Matthew England. Other surviving family members include her favorite first Cousin Nancy Rhea and her very special niece Jill Cook Earl. Grandchildren include: Lori England, Douglas Ledbetter and wife Cara, Adam England and wife Katy, Amber Burke and husband Brian, Raychel Bayless and husband Jeff, Rebekah Hanna and husband Trey, Aime Arnold and husband Shain, Spencer England and wife Whitney, Mark England Jr. and wife Rachel, Russell England and girlfriend Brooke Garland. Great Grandchildren include: Brady and Blakely Ledbetter, Aiden and Harrison England, Keeley and Tipton Burke, Campbell and Baker Jane Bayless, Delainey and Giles Hanna, Kennedi and Presley Arnold, Daisy England. Her adopted daughter Connie Freemon Slaughter, her best friend of 50+ years Donna Robbins and fur baby Max. Barbara was co-owner of Centre Stage with her daughter and daughter-in-law. Barbara once performed on the Cas Walker Show in Knoxville, TN. Barbara was a member of Central Baptist Church and served as Treasurer of the Esther Sunday School Class and a past member of the Central Baptist Church Joy Choir. Barbara will be greatly missed by her family and her many, many friends. The family would like to thank the nursing staff on the 4th floor of the Johnson City Medical Center, also the nursing staff on the 2nd floor at Franklin Woods Hospital and a very special thank you to her Care Team from Amedisys Hospice Care, especially her Hospice Nurse Laura Evans who treated her with the greatest of respect and dignity during her final days. The family will receive friends from 2-4 pm on Sunday, January 12th at Appalachian Funeral Home followed by a Celebration of her Life, with Pastor Dr. Tommy Hood officiating. Music will be performed by Mr. Scott Self and Tony Martin. Burial will take place on Monday at 1 pm, January 13th at Fairview Cemetery in New Tazewell, TN where she will be laid to rest next to her mother. Pallbearers will be a combination of her sons and grandsons. In lieu of flowers, memorial contributions may be made to either St. Jude’s or to the Juvenile Diabetes Research Foundation (JDRF) – 109 South Northshore Drive – Ste. #401 – Knoxville, TN 37919.

Barbara H. England Marks age 83 of Johnson City passed away peacefully on Thursday, January 9, 2020 surrounded by family and friends. Barbara was born in Knoxville, TN on February 19, 1936. Barbara was preceded in death by her parents Fred and... View Obituary & Service Information

The family of Barbara England Marks created this Life Tributes page to make it easy to share your memories.

Send flowers to the Marks family.