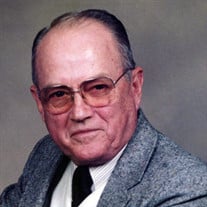 Arthur Louis Johnson, age 94, of Johnson City, passed away on January 14, 2020 at Franklin Woods Hospital. He was a native of Washington County, and was the son of the late J. Frank and Nola Lee Maine Johnson. In addition to his parents, Louis was preceded in death by his siblings, Frank Jr., Dewey, Carl, Dolores Bowman, Wanda Osborne, and a very dear friend, Jack Gregory. Louis was a member of Clifton View Baptist Church. He was a pipefitter by trade who was a proud member of the Plumbers and Pipefitters Local 538 for more than 60 years. During WWII, Louis worked at Oak Ridge for the Carbide and Carbon Chemicals Corporation where he was exposed to radiation that caused health issues later in life. Additionally, Louis worked at the ASG glass plant in Kingsport, and at several TVA power plants, including Phipps Bend and Watauga Dam. He lovingly dedicated his life to his family. Louis enjoyed gardening, listening to music, and being a jack-of-all-trades for family and friends. He was a jokester and loved to make people laugh. Those left to cherish his memory are his children, Sandra Harrison, Johnny Johnson (Joan), Glenn Johnson (Melissa), Nancy Johnson (Dave Arnold) and an honorary daughter, Pam Walker. He had five adored grandchildren, Mark Smith, Drew Johnson (Sarah), Matt Johnson (Amber), Sara Mottern (Nate), and Chad Johnson; an honorary granddaughter and grandson, Lindsey Ferguson and Jordan Walker; two great-grandchildren, Hannah Johnson and Averie Johnson Mottern. Louis also had several nieces and nephews that he loved as his own, as well as a number of cousins and cherished friends. A service to honor the life of Arthur Louis Johnson will be at 7:00 P.M. Friday, January 17, 2020 in the East Chapel of Appalachian Funeral Home with Rev. Claude Babb, officiating. The family will receive friends and family prior to the service from 5:00-7:00 P.M. in the East Parlor. The committal graveside service will be conducted at 1:00 P.M. Saturday, January 18, 2020 in Monte Vista Memorial Park, 1900 Oakland Ave, Johnson City. Those wishing to attend are asked to arrive at Appalachian Funeral Home by 12:30 P.M. Active pallbearers will be Mark Smith, Drew Johnson, Matt Johnson, Mike Johnson, Dave Arnold, and Jordan Walker. Honorary pallbearers will be Johnny Johnson, Glenn Johnson, Teddy Maine, Kyle Osborne, Jay Bowman, James Hammonds, Jay Pritchard, and Jay Walker. The family would like to extend a special thanks to the staff at Franklin Woods Hospital, who went above and beyond the call of duty in caring for Louis. Additionally, the family wishes to thank Dr. Frank Alan Forbush for many years of care, as well as Ballad Hospice for their help in making his final days peaceful. Those who prefer to make memorial contributions in lieu of flowers may donate to The Bridge Home No Kill Animal Rescue, PO Box 654, Blountville, TN 37617 or Shriners Hospital for Children, 2900 North Rocky Point Dr. Tampa, FL 33607.

Arthur Louis Johnson, age 94, of Johnson City, passed away on January 14, 2020 at Franklin Woods Hospital. He was a native of Washington County, and was the son of the late J. Frank and Nola Lee Maine Johnson. In addition to his parents, Louis... View Obituary & Service Information

The family of Arthur Louis Johnson created this Life Tributes page to make it easy to share your memories.

Arthur Louis Johnson, age 94, of Johnson City, passed away on...

Send flowers to the Johnson family.