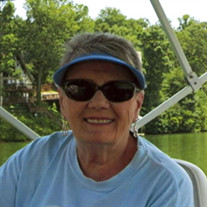 Ann K. Lacy, 84, Erwin, died Thursday, April 16, 2020, at the Center on Aging and Health, following a brief illness. Ann was a native and former resident of Johnson City. She was the daughter of the late Richard Lacy, Jr. and Helen Faulk Lacy.... View Obituary & Service Information

The family of Ann K Lacy created this Life Tributes page to make it easy to share your memories.

Send flowers to the Lacy family.