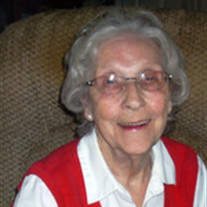 Alice "Lucille" Richardson- Lucille, as she was called by her friends and family, was born in Elk Park, North Carolina on June 27, 1926. She was preceded in death by her parents, Nelson David Hicks and Lizzie Clark Hicks Hamm. She was currently... View Obituary & Service Information

The family of Alice "Lucille" Richardson created this Life Tributes page to make it easy to share your memories.

Alice &quot;Lucille&quot; Richardson- Lucille, as she was called by her...

Send flowers to the Richardson family.