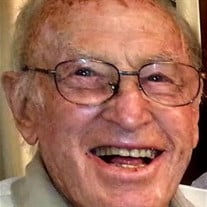 Albert Geoffrey “Geoff” Robins, 97, Johnson City, died Friday, November 22, 2019, at The Waters of Johnson City. Geoff was born June 13, 1922, a native of Cambridge, New Zealand, and had been a resident of Johnson City since 2012. He was the son of the late Albert Claude Churchill Robins and Emily Isabella Reynolds Robins. Geoff was a fighter pilot in WWII, a veteran of the Royal New Zealand Air Force. He then served in the Merchant Marines, traveling the world. Geoff initially settled in Vancouver, British Columbia, Canada, where he met his wife and started his family. He then immigrated to the U.S. with his family where he proudly became a U.S. citizen. Geoff lived and worked in Seattle, WA, Phoenix, AZ, and Las Vegas, NV. He was a retired Residential and Small Commercial Building Contractor, providing affordable housing to thousands of families. Geoff became a follower of Jesus very late in life, a testament that it is never too late in this life to know your Lord and Creator. In addition to his parents, he was preceded in death by his loving wife of sixty years, Patricia Elizabeth Colleen Lounsbury Robins, in 2013, and his sister, Margaret Tippett. Geoff is survived by three children, Dr. Guy Robins and wife Janet, Johnson City, Mary Cook, Hawaii, Emily Huffman and husband Tony, Las Vegas, NV; six grandchildren, Phillip Robins and wife Liz, Nashville, Heather Beverly and husband Jim, Knoxville, Stephen Robins and wife Christine, Bristol, Rebecca Robins, Miami, FL, Jeremy East and wife Anna, Santa Clarita, CA, Gavin Sanchez, Las Vegas; seven great-grandchildren. The family would like to extend a very special “thank you” to the staff of The Waters of Johnson City and to the nurses, C.N.A.’s, and staff of Amedisys Hospice for their excellent care.

The family of Albert Geoffrey "Geoff" Robins created this Life Tributes page to make it easy to share your memories.

Send flowers to the Robins family.