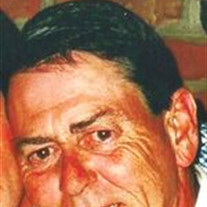 Albert John McMullen, Jr (Barney) died on Wednesday, January 24, 2018 at his home in Johnson City, Tennessee. He was predeceased by his parents A. J. McMullen, Sr. and Dorothy Moran McMullen and his wife of 48 years, Sue Ann Widing McMullen. He is survived by three children, Marjorie McMullen Thomas, A.J. McMullen III , Julie McMullen Shearin and husband Don, all of Johnson City; six grandchildren, Jules Moran Thomas, A. J. McMullen, Lindi Sue McMullen, Laney Rush McMullen, Marshall McMullen Shearin and Madison Fern Shearin, One brother James Rush McMullen (Ann),two sisters, Susan (Terry) Davin, Patricia (Bill) Kolkmann and many nieces and nephews. Barney was born in Camden, New Jersey on April 11, 1941. The family lived in Haddonfield New Jersey where Barney attended Christ the King Catholic School and Haddonfield High School. The family moved to Rochester, New York where he attended college and met and married his wife, Sue Ann Widing in 1966. Barney served his country in the Air Force. He was actively involved in the family business, JARL Extrusions, which originated in Rochester, New York. When the company moved to Elizabethton, TN in 1977, he and his family moved to Johnson City. After retirement Barney and Sue Ann took up residency in West Palm Beach, Florida, until 2014. Barney was an avid golfer, often made sure his siblings (And any others that would listen) knew he had 13 "Holes in one". He remarked often, his secret "Aim for the Hole". Barney led a fun loving, spirited life and enjoyed his family and many friends at the ninetieth hole. The family will have a private service at a later time. In lieu of flowers, memorials may be made to St. Mary's Catholic Church, 2211 E. Lakeview Dr., Johnson City, TN 37601. Order Flowers

Albert John McMullen, Jr (Barney) died on Wednesday, January 24, 2018 at his home in Johnson City, Tennessee. He was predeceased by his parents A. J. McMullen, Sr. and Dorothy Moran McMullen and his wife of 48 years, Sue Ann Widing McMullen.... View Obituary & Service Information

The family of Albert John McMullen created this Life Tributes page to make it easy to share your memories.

Send flowers to the McMullen family.