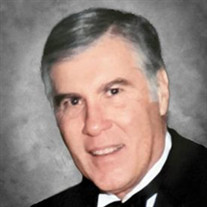 Al Lizzio, 94, Piney Flats, died Friday, March 11, 2022, at the Johnson City Medical Center, following a brief illness. Al was a native of Philadelphia, PA, and a son of the late Joseph and Philomena Lizzio. Al was a first-generation Italian American who was raised in New York City. He was a baseball star in high school and was signed with the Philadelphia Phillies. He was drafted by the U.S. Army during World War II, serving in Italy as a Sergeant. He returned home to pursue a career in Sales with Cutco Cutlery. His career with Cutco took him from the Northeast to the Southeast over his 30-year career, retiring in 1982 as National Sales Manager. He always enjoyed keeping in touch with his peers over the years. Al spent his retirement in Sarasota, FL enjoying golfing, boating, helping his daughter Nancy run 2 Dairy Queens, and socializing with family and friends. In 2019 he moved to Tennessee to enjoy his remaining years with his son and daughter-in-law, grandchildren, and great-grandchildren. He attended Poplar Ridge Christian Church. In addition to his parents, Al was preceded in death by his wife, Florence McCann Lizzio, in 2008, two daughters, Debbie Pizzuto and Nancy Darby, his brother, Anthony Lizzio. He is survived by his son, Bill Lizzio and wife Pam, Piney Flats; four grandchildren, Bill Lizzio and wife Beth, Amanda Lancaster and husband Shane, Michael Pizzuto and wife Paige, Nick Pizzuto; two great-grandchildren, Grant and Wyatt Lizzio; son-in-law, Ralph Pizzuto; three nieces, Elaine Fitzgerald, Brenda Lizzio, Linda Bednarek and husband Michael, and sister-in-law; Elaine Lizzio. The family would like to extend a very special “thank you” to the staff of Dominion Senior Living of Johnson City, and caregiver Shirley Lilley. The memorial service celebrating Al’s life will be conducted Saturday, March 19, 2022, at 4:00 P.M., in the Sanctuary of Poplar Ridge Christian Church, 206 Poplar Ridge Church Rd., Piney Flats, TN 37686, with Evan Wolfe, Minister, officiating. Immediately following the service, the family will receive friends at the family farm. In accordance with Al’s wishes, his cremains will be buried at sea in Sarasota Bay. Those who prefer to make memorial contributions in Al’s name in-lieu-of flowers, please do so to the Alzheimer’s Association of Northeast Tennessee, 2319 Browns Mill Rd., STE d6, Johnson City, TN 37604.

Al Lizzio, 94, Piney Flats, died Friday, March 11, 2022, at the Johnson City Medical Center, following a brief illness. Al was a native of Philadelphia, PA, and a son of the late Joseph and Philomena Lizzio. Al was a first-generation Italian... View Obituary & Service Information

The family of Al Lizzio created this Life Tributes page to make it easy to share your memories.

Send flowers to the Lizzio family.